Find out about us...

Here we are on Fesdu Island, Maldives in March 1997.

The hotel thought it was our anniversary and decorated our table in the dining room with bougainvillea!
Can't imagine how they got that idea.......

We had a great time - click for more info about our holidays. We live in a village in Bedfordshire, England (email us if you want the full address). 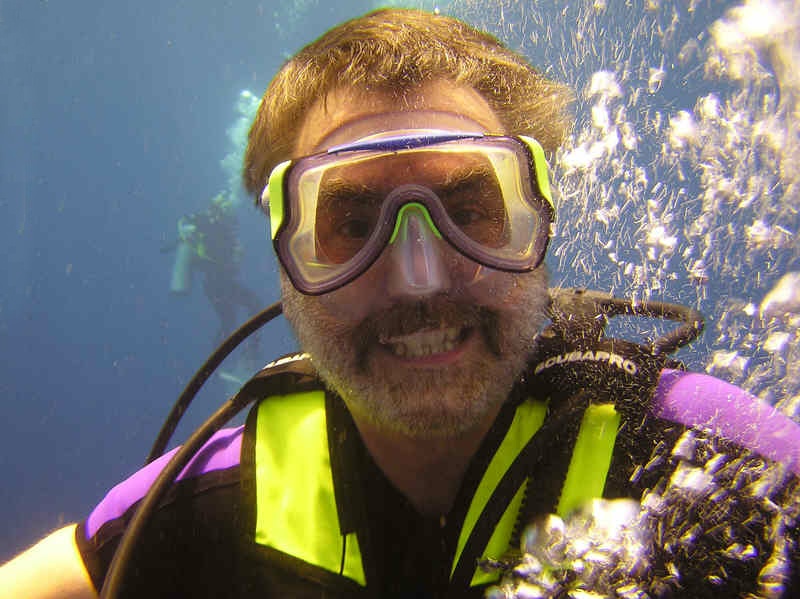 John learned to dive in the Maldives, where the water is like a warm bath (29°C all year round).  The coral reefs are spectacular, and the marine life is just out of this world!  John has swum with manta, eagle and sting rays, leopard, nurse, silvertip and whale sharks, caribbean, white-tip, black-tip and grey reef sharks, turtles, barracuda, and hundreds of species of reef fish.  Read John's reports of diving in the Caribbean, the Maldives, and Thailand.

When we both worked in London, we used to go to NatWest's Wine Society each month to improve our knowledge and appreciation of fine wines.  Now we just drink the stuff...

John cut his teeth programming in 3GLs (eg BASIC, TenCORE, Pascal), DOS batch language and x86 Assembler, and progressed (if you can call it that) to Visual Basic (3, 4, 6, Studio).  Now fully into Web development with HTML/XHTML, Javascript, PHP and CSS.

Currently using Canon Digital Ixus 110 and Olympus 750 Ultrazoom digitals, with underwater housings, and a Canon EOS 550D with a Canon 18-200mm zoom lens.  Check out our holiday reports for underwater pictures in the Maldives and the Caribbean.

In 2002 we got interested in our ancestors, using the (now closed) Family Records Centre in London and Web resources such as Ancestry, Old Maps, FamilySearch, FindMyPast and FreeBMD to research our ancestors.

Since 1990 John has been a software development Project Manager, with experience in the creation of CD-ROM-based multimedia training programs in Visual Basic and Authorware, and the development of substantial Web sites for on-line learning using Dreamweaver, Flash, Javascript etc.  He has also been a Product Manager, defining and managing the creation and launch of a multi-million pound web site.

NatWest couldn't manage without him though - it was subsequently taken over by Royal Bank of Scotland and driven into the ground by Fred Goodwin's megalomaniac ambitions.
...hereinafter known as :

From 1998 to 2001, he was a project manager with The Admiral Group (no, not the car insurance people, a project-led consultancy group) with responsibilities including project-managing the development of training, and managing the production of bids in the Defence and Government sector.
...hereinafter known as :

In June 2000 Admiral was taken over by Holland-based CMG, and the new group was called CMGAdmiral.
In October 2001, as the hi-tech bubble burst, CMGAdmiral announced that it was making 10% of its work-force redundant.  Because he had been attached for a six-month stint to a section that was disappearing anyway, he found himself without a role, and hence without a job.
...hereinafter known as :

A year or so later, the "Admiral" part of the name was dropped, and the group reverted to "CMG".
...hereinafter known as :

Since he left they were taken over by Logica in December 2002 to become LogicaCMG...
...hereinafter known as :

And in August 2012, Logica were taken over by CGI Group Inc of Canada, and the Logica brand name disappeared shortly afterwards.  Last time I looked, the logica.com web site took you straight to CGI's web site, where Logica only featured as a short paragraph in the "Our History" section.

In January 2013, doubtless amid the sounds of whalesong and with the smell of incense, the corporate brand planners changed the logo, making it "...enlarged and simplified to demonstrate a direct, powerful presence for CGI in the market going forward".
And in January 2021 CGI had a further update of the brand identity "...to signify how it helps clients harness the power of technology to create value for their customers and citizens."  This time the logo stayed the same.  The Logica name now only occurs in CGI's Press Release archive, reporting on old contracts won, and the take-over.

Back with NatWest, or rather The Royal Bank of Scotland, in 2001 on a contract with the very successful Streamline Merchant Services, part of the RBS Group.  So the "dunbankin" domain name wasn't too relevant!  I ended up project managing a superb (though I say it myself) £2m+ web project ("Streamline Online"), and I left Streamline after its successful launch in 2006.  While I was there, Streamline acquired several other UK, European, US and global brands such as WorldPay, Bibit and Lynk, and combined them all under the umbrella title of "RBS WorldPay".
...hereinafter known as :

Then Fred Goodwin destroyed RBS, and the EU insisted that RBS sell off the best bits of the Group as a precondition for the government bail-out.  The whole RBS WorldPay group of brands, including Streamline, got sold off to a couple of venture capitalists, Advent International and Bain Capital, for a reported £2bn in 2010, and the "RBS" bit of the name was dropped.  WorldPay still used the "Streamline" brand for a while, but the Streamline website was replaced with the WorldPay website, and the old Streamline logo has finally disappeared, so the Streamline I knew is officially dead...
In October 2015, Worldpay floated on the London Stock Exchange, and was valued at £4.8 billion.
...hereinafter known as :

In August 2017 it was announced that Worldpay was "merging" with US rival Vantiv.  Vantiv will have more directors on the board, a greater share of the share capital, and the group headquarters will be in Cincinnati, Ohio in the U.S.  So it's a "merger", similar to how Poland "merged" with Germany in 1939.
Vantiv paid US$10.4bn for WorldPay.
...hereinafter known as :

The chase goes on...  On 18 March 2019, WorldPay Inc was bought by Florida-based Fidelity National Information Services (FIS) for US$35bn in cash and shares, plus WorldPay's debt.  The combined company will retain the name FIS, there will be more FIS directors than ex-WorldPay directors on the board, the HQ will remain at FIS's HQ in Florida, and the Chairman and CEO of FIS will keep control.
The WorldPay name has been retained as a trading name of FIS, and is now (2021) known as "WorldPay from FIS", at least in the UK.

Now relaxing after leaving Streamline in 2006 following the successful launch of his main project "Streamline Online" (SOL).
2015-ish Update: Worldpay has moved Streamline Online's website to their own domain, and given it a complete make-over cosmetically to fit in with Worldpay's corporate style.  It's still the same web site underneath, though.
June 2021 Update:  It looks like Streamline is now completely dead - clicking on the old "SOL.worldpay.com" link now takes you to a FIS page which says the service is discontinued, and inviting you to use FIS's own reporting tools.

Linda also grabbed a package from NatWest in 1999 and then worked for a firm of solicitors, who seemed to appreciate her securities perfection know-how.  Now also relaxing.

Started with Compu$erve in 1992, switched to Freeserve, then to Plusnet, which came with 250Mb web space, and started this web site in early 1998.  Upgraded from FrontPage Express to FrontPage 98, to DreamWeaver 4, MX, MX2004, CS6 and down to Aptana, but I'm just as happy hacking HTML, CSS and Javascript using Notepad++.  I'm finding out more about Web site authoring as I go along, so it's not frivolous activity (much).

A fourth-century Roman would know today's date as:

Blogging software wasn't available when I started this site, so it's custom-made, and I continue to tweak it to look better.  Converted the entire site from HTML4 to XHTML1.1 following W3C's guidance, then back to HTML5/CSS3 when fashions changed.  Bought our domain name "dunbankin" in 2001 from Just-the-Name - a brilliant service which worked really well, until it was bought by BT, who suddenly decided to close down the service in 2017.  So I've had to move both domain names and web site away to Namecheap, who seem to provide a good service at a good price.

Got a web site? Get it listed in Google.

Quite a way to go on this project unfortunately.  We'll get there eventually though.  Provided the Lottery smiles on us....